The Smoke Shop has a large selection
of Fine Cigars

Housed in our newly reconstructed walk-in humidor, you'll fine one of the largest selections of quality cigars Naples, FL has to offer. We stay current with the top brands and the labels you know.

Cigars have a long and interesting history. They have been around for well over a thousand years, although not in their present form. Wikipedia defines a cigar as being a tightly wound bundle of tobacco that is ignited so that the smoke can be drawn into the mouth. This was, in fact, all that cigars were for many years. They are thought to have been invented by the ancient Mayans, who wrapped the tobacco in either palm or plantain leaves. In fact, an ancient Mayan pot from the 10th century depicts a Mayan man smoking one of these primitive cigars. While this clearly demonstrates that smoking was common at this time, it is not known just when the Mayans discovered the tobacco plant and its ability to be used for smoking purposes. 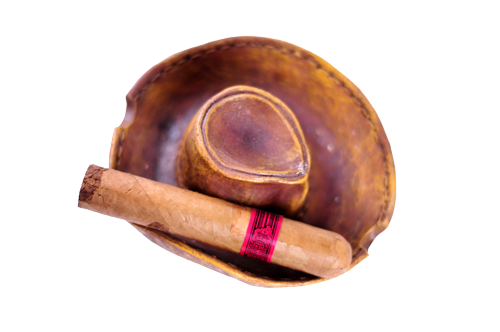 Christopher Columbus and his men were the first Westerners to encounter tobacco in recorded history. Local Indians introduced the tobacco plant to Columbus’ men through trade. One of Columbus' lieutenants was particularly drawn to primitive cigar smoking and smoked every single day on the long journey back home.

Smoking caught on and became quite popular in Spain and Portugal. The French ambassador to Portugal, Jean Nicot, made cigar smoking popular back in his home country; in fact, the word nicotine is derived from this man's name. Cigar smoking then spread to Italy and other European nations. By this time, Spanish manufacturers had developed the art of wrapping dried tobacco in specialized papers instead of leaves, thus making smoking a refined art. While some rulers such as King Phillip II of Spain and King James I of England denounced smoking as being evil, the cigar grew in popularity as companies started growing tobacco for commercial consumption.

While most European cigars were originally manufactured in Spain, it was not long before the Spanish found that Cuba was the ideal place to grow tobacco. This country's climate is in fact ideal for growing this plant, which explains why Cuban cigars have become famous the world over. When Spain originally tried to completely dominate and monopolize the cigar industry, many cigar manufacturers moved to Key West, Florida. Other manufacturers instead opted to grow tobacco in the Philippines, which was at the time a Spanish colony.

New York became an unlikely yet very popular destination for cigar manufacturers. In fact, with time, many small manufacturers started creating cigars in their own apartments. The state, at one point in time, tried to ban the creation of cigars, but to no avail. The ban was lifted only four months later and cigar manufacturing and use continued to grow in popularity.

There are a few different types of cigars. The most common one is the Parejo, which was probably the original cigar shape created by the Mayan Indians. It is a simple cylinder, the exact same shape in which modern cigarettes are made. There are over a dozen different types of Parejo cigars, such as the Toro, Corona, and Carlota. Some Parejo cigars, such as the Churchill, Rothschild, and Lonsdale, were named after famous people who smoked publicly and thus helped to popularize cigars.

Figurado cigars were very popular in the 1800s but are not as common in modern times. Their irregular shape makes them unique, and they are expensive to manufacture and purchase. Indeed, these cigars are collectors’ items for those who are fortunate enough to find them for sale on the market. Some of the many popular figurado cigars include the Presidente, Torpedo, and Toscano.

Cigars have been around for thousands of years. They were originally brought from the "New World" back to Europe; the Europeans then started the tobacco industry and made cigars popular the world over. While it is now known that smoking can cause cancer and other serious health problems, the concept of smoking a cigar, cigarette, or pipe continues to be popular all around the world. However, while there is more than one way in which a person can get his or her intake, smoking a well-made cigar has come to symbolize importance and quiet confidence.